Yard work and a toddler update!

Emma & Evan had a new experience last night.  They went to their first Lander baseball game.  I wasn't there because I was on a much needed shopping trip so Justin braved that on his own and they did wonderful or so he said.  A guy Justin works with had asked us to go.  His wife works at CountyBank and they were the sponsors last night so they had tickets to get in.  I tried to tell Justin I didn't think he should do that on his own...but I'm glad he did.  Since the weather is FINALLY warming up...I went to Doris' yesterday and got my spring flowers.  My plans were to spend all day working in the yard...but of course, Justin had to go turkey hunting this morning...so, I made a quick trip to Greenwood to continue my shopping.  The main thing I was shopping for last night was capri pants...and I only found one pair I liked.  I am NOT a fan of anything stretchy and I think that is the style now.  My legs aren't made for those kind of pants.  Thankfully I found several pairs at Kohl's this morning.  Emma & Evan even let me try them on.  I usually just take things home to try them on...but since they seemed to be in okay moods...I gave it a try!  I had also planned to make a quick trip by Connie Maxwell for a stroll around the neighborhood.  Bathing suit time is drawing near and I HAVE to get rid of some of this weight!!  BUT...since Justin killed turkey #2...we headed home to take some pictures for Daddy!  On his way home Justin stopped by Riley's for some hotdogs.  I am not a fan of hotdogs...but I will eat a Riley's hotdog anyday.  I thought it would be a good time to introduce Emma & Evan to this wonderful meal.  They weren't too thrilled!  I don't know if it was because they were sleepy and wouldn't have eaten much of anything at this point or if they aren't fans of Riley's.  I am sure the latter isn't the case!:)  After lunch and naptime...we finally got around to working in the yard.  Justin cut the grass and weedeated!  As allergic to grass as I am, freshly cut grass is still one of my most favorite smells.  I even was able to plant some of my flowers.  The ones on the deck had to wait until tomorrow.  Emma & Evan were beyond tired at this point and Easton came to visit for a few minutes...so we decided to head inside.  Here are pictures of our hard work. 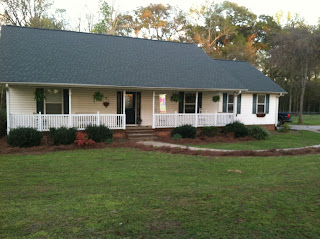 Our freshly cut grass, my ferns, the new pine straw, and some of my flowers.  You can't really see the flowers in this picture...but they are there! :) 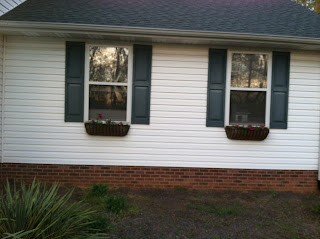 Flower boxes all ready.  The flowers aren't that full now...but give it a few weeks and they will be over flowing! 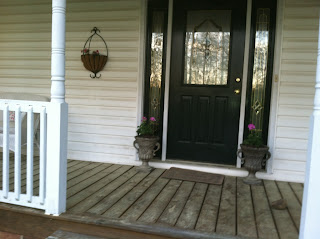 Ignore the pollen!!  That is a project already on Justin's to-do list for for May...pressure washing the house, along with staining the deck!  He doesn't know I have started his May list already...but hey I gave him the month of April :)

We had such a good day outside.  The weather was BEAUTIFUL and Emma & Evan played all day.  By the time we came in for bathtime & supper it was 6:30.  It is now 7:45 and they are both out!!  Hopefully they sleep all night!! So, I promised a toddler update...what are Emma & Evan up too these days you might ask??  Well, other than cutting MORE teeth...not much else is happening.  Emma now has 11 teeth and Evan is up to 10.  By his NASTY diapers the past two days...I would be willing to bet #3 and maybe #4 molars are coming in.  They are both talking a whole lot more now.  Evan is still out talking Emma but she is catching up quickly.  This week, Evan said his first sentence.  When Justin got home and picked Evan up he asked Evan "What's up big boy?" Evan repeated it word for word twice.  I wouldn't have believed him if my mom hadn't heard it too.  He was watching his DVD on TV the other day and when the fish came on the TV, he said fish. He did the same thing with the deer.  He said crab too but that was only after the DVD said crab.  He is definitely learning to repeat things he hears!  Emma will repeat things too.  My mom told her she stunk the other day and she went around saying "stinky, stinky" all afternoon.  Emma knows almost every part of her body and will point to them when you ask her too.  They love the song the Itsy Bitsy Spider and will do the motions and they love Ring Around The Rosey!  That is a fun one to try with them!  They are also learning to pitch temper tantrums.  How fun are those?!?!?!?  They seem to come around more often when they are tired...but wow!  I have instructed anyone and everyone who keeps E&E to NOT give into temper tanrums.  When they start these fits of rage...we just walk out of the room.  They always get over it as soon as they realize their audience is gone.  I am amazed that of all the things we have to teach kids...temper tantrums come so natural!  We know this is part of life and that we just have to help them get through this stage!  They are still the sweetest kids ever!!  We have a busy next few weeks.  This coming Friday, Justin is heading to Georgia for a bow shoot & Saturday, we are heading to Charoltte for Justin's cousin's wedding.  The following weekend we are supposed to go to the Columbia Zoo with Lauren, Brian, & Colby.  We have been wanting to take Emma & Evan before it gets to hot...so when Lauren called...we jumped right on that idea.  I think we are going to take a lunch and have our first picnic!  Still making those plans though.  Anyways...until next time...I will keep keeping track of all the fun new things we are learning in life so you won't miss a thing!  Come on back now..ya hear!!!
Posted by mreid496 at 5:17 PM