Hopefully we are on the mend...

The Turner household has not been a healthy one this past week.  Wednesday night Evan started running a low grade fever.  He was still pretty warm when I headed to work Thursday morning but I figured I would wait it out a day and if he still had the fever Friday...I would take him to the doctor then.  We did this same thing with Emma last week and they deteremined the fever must have been from teething.  I was trying to save us $25 and a trip to the doctor.  However, I made myself an appointment Thursday for my sinus issues once again.  It is literaelly becoming a normal thing for me to have a sinus infection.  Pat finally agreed to do a xray & ct-scan of my head to be sure nothing seemed unnormal about my sinues and to be sure there wasn't something else causing my headaches.  When I left my appointment Thursday, I stopped by the house to check on Evan and momma thought I might should take him in for an appointment.  When we got there his temperature was 103.7 but his medicine had worn off.  That is still too high for this momma.  I was a little panicky!!  His ears were clear and he tested negative for the flu...so they determined it was probably something viral and sent us home.  So, the next few hours we made sure Evan kept medicine in him and that fever stayed down.  I kept them home from the nursery Friday morning.  As I mentioned in my last post Justin was supposed to head to Georgia for a bow tournament.  However the nasty weather changed Justin's plans.  About 10:30, I get a called from a strange number at work.  Justin had locked himself outside and the babies inside.  Normally it takes me about 15 minutes to get home but I was home in 11 minutes and that included waiting on the train.  I couldn't beleive the train was there of all times.  He wonders why I don't leave my babies with him too often!! :)  I went Friday afternoon for my xray & ct-scan.  It didn't take long and I was home in no time.  We decided to head to Chili's for supper and just as we were heading inside I got a call from Pat.  Both my xray and ct-scan showed nothing abnormal.  There were a couple things like a hardened sinus cavity and a deviated septum...if that is how you even spell that...but nothing we can do about either of those.  It was a relief that the headaches aren't coming from anything major.  Now we just have to get them under control.  Saturday morning we headed out to the March of Dimes walk to walk with Learning Express. 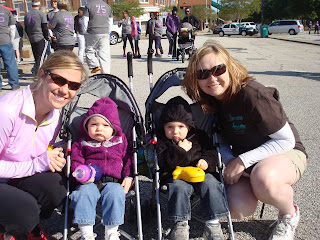 It was freezing cold!  The walk was supposed to start at 9:00 but after the warm up and awards it was almost 9:45 when we started.  Emma & Evan did rather well to sit there for 45 minutes before the walk even started.  We only managed to walk a short distance and turned around.  It was the greatest location to have the walk to begin with.  While we were at the walk Justin finally took himself to the doctor for a sinus infection and went into work for a while.  Since Justin wasn't feeling good...I wasn't feeling good...and Evan still wasn't feeling too good...we decided to skip out on the wedding.  Julie understood and from what I hear everything went really well.  We spent Saturday afternoon playing outside for a while.  Justin tried teaching Evan how to hit a golf ball.  He really just want to do it by himself...but I was able to catch one picture... 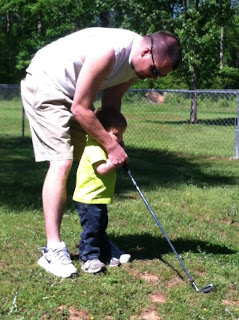 Then, Easton came over to visit for a while.  His grandparents live next door so he visits us often.  I know him and Evan will be great friends one day.  Justin had told a guy from work that we would meet him and his wife for supper Saturday night...so we headed inside for our afternoon snack and to start getting ready to head out for supper.  I was trying to keep Emma & Evan clean because I didn't really have time to give them a bath.  This is what Emma looked like after snack time. 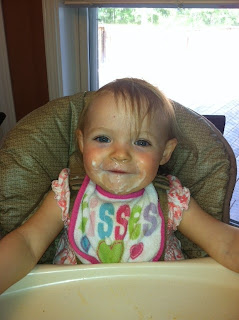 My poor child doesn't do well when she tries to feed herself yogurt.  As you can see...she even wiped it all in her hair!  So, we headed to Outback for supper.  That was our first time taking E&E there but it went really well.  We even got to see some people all dressed for the prom.  I sure miss going to the prom!!  Then, today...we headed to church this morning and came home for Evan to take a nap.  Emma was having no part of nap time.  Like normal we ate lunch at momma's and played outside there for a while.  The rest of our afternoon has been pretty lazy.  Sometimes you just need a lazy day.  So, all of our weekend plans changed...but it was still a pretty good one considering all the sickness.  Our plans for next weekend might have changed as well.  Brian was supposed to have a fireman training next weekend so we moved our Zoo trip to a weekend in May but Lauren & I were going to take the kids to Emerald Farms next Saturday.  They have a petting zoo type thing and even a train ride on Saturday.  So, we planned to do that and have our picnic...but Brian's class got cancelled for next weekend.  So, I am waiting on Lauren to decide if we are going to go ahead and do the zoo next weekend or leave that for a weekend in May and do the Emerald Farms deal.  I told her it didn't matter to me.  So..that will be a surprise for you in next week's post.  Until then...hope you guys have a great week and that the Turner's are finally on the mend!! :)
Posted by mreid496 at 5:34 PM