What a wacky Wednesday???

Have you ever had one of those days that when it comes to a close you think "well that didn't go at all like I had planned?" Well today has been one of those days for me.  We got up and took Emma & Evan to school like normal.  Poor Evan cried when I left him.  It breaks my heart to have to leave one of my babies crying.  I know he was fine just minutes later thanks to a text from Jillian...but that is still my baby and he was wanting his momma.  These past few weeks he has defintiely been a momma's boy.  No complaints about that from me though!  Since momma broke her arm...Justin has been meeting her on Wednesday's at school to put them in the car.  Then, momma runs errands and drives them over to D&F and waits for me to get off. They both feel asleep while waiting on me to get off.  That is NEVER a good thing because they only sleep for a few minutes and the rest of the afternoon doesn't go well.  Today was no exception.  Emma was already back awake and not taking another nap by the time we got home.  I laid Evan down as soon as we got home and he slept for maybe another 30 minutes.  During this time...Emma and I ate lunch.  I have really been trying to give Emma & Evan different things to eat in hopes that they won't be picky!  This week they have eaten Taco's, Talapia, Deli Turkey, peanut butter & jelly...and our new experiment today was Spagetthi O's.  They LOVED them.  After Evan woke up and I finally got him to eat something. I decided we needed to get out of the house for a while.  We went to Connie Maxwell for a little stroll.  I love to take them there because 1) it is always quiet 2) it is just a fun place to go for a stroll.  Emma & Evan really seemed to enjoy the stroll.  Then we went by Cookout for a milkshake.  I have heard people talking about these milkshakes and thought it was time to try one.  I got the Oreo one and it was GREAT!!!  I was even a good wife and took one to Justin at work.  Once we got home and Justin got home...we played outside for a little while.  Justin and I decided it was a good idea to eat supper early and to take Emma & Evan to the woods and check his trail camera's.  So, we loaded up their push cars and headed for the woods.  We all got out and loaded E&E in their cars and started walking down the lane toward the first food plot.  Justin proceeded to stop and pull out the turkey call and start calling.  Thanks to my good ears...I thought I heard one gobbling back.  I should have never said anything.  Between E&E blowing the horns on their cars and squealing...it was awful hard to hear the turkey.  Justin did the call againa and it was defintiely a turkey and he was coming toward us.  Justin went into panic mode.  We took off back to the truck so he could change clothes and grab his gun.  He thought I was going to sit in that HOT truck without it running because that might run off the turkey with two babies who were quite content in their little cars.  I honestly was trying to keep them quiet and once I knew the turkey was coming closer to us...I did load them back up in the truck.  All this happened within maybe 15 minutes and I heard the gun shots...so I knew the turkey was dead.  Justin reappeared with turkey.  Then, we had to have picture time with Emma & Evan.  Here is one of the pictures we took. 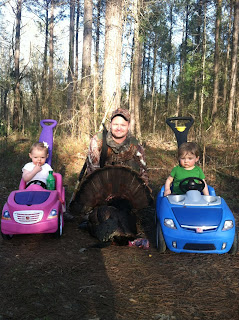 After picture time we finally went and got the camera and headed home.  We then had to drop off Justin's truck for it to be worked on tomorrow and ended up back home at 8:00.  E&E were extremely ready for bed.  We changed them and laid them down.  It is now almost 10:00 and we haven't heard a peep out of them.  Nothing about this day went like I had planned.  I had planned to spend this afternoon going through E&E's clothes and getting out the spring/summer stuff and I didn't do any of it.  It was defintiely a day I will remmebr for quite a while though!  Well, it's time for Duck Dynasty...so I better get going.  We are hoping to work in the yard this weekend...so that I am sure will be an adventure with two toddlers!! Happy Wednesday!!﻿
Posted by mreid496 at 7:25 PM