Emma & Evan turned 18 months old the week Justin was in Oregon and I rescheduled their appointment for this week.  I was not about to do shots by myself.  I'll start with Emma.  She weighed 25lb 8oz (65%), was 32in long (56%), and her head still measured 19 in (89%).  To be so little she apparently has a large head! :)  Evan weighed exactly 27lbs (65%), was 33in long (66%), and his head still measured 19 1/2 in (89%).  The both are doing great developmentally.  Some of their words now consist of no-no, thank-you, please, no-mam, what's that, dog, cow, ball, mick-mouse (Mickey Mouse), etc.  They love to sing their ABC's and you can actually tell what they are singing now.  They will do I Love You by pointing to their eyes, heart, and then to me!  They both love to give me hugs and I love every minute of it.  They also like to hug each other a lot.  Evan gets tired of Emma's hugs real quick but it is so sweet.  She treats him like her baby.  She will brush his hair, rub his back, and try to bathe him in the bath tub.  Whenever Evan cries she tries to give him his paci and make him feel better.  Poor Evan...he is going to have two momma's his whole life!!  Here is a picture of her giving him his paci.  Too cute!! 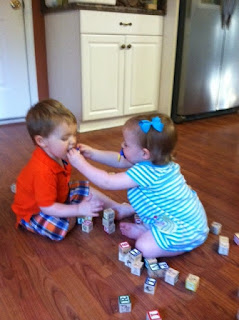 Back to the 18 month appointment.  They did great with the exam, other than the whole letting Dr. Felder look at their teeth part.  Our 1st dentist appointment is going to be FUN!!!  They even did really good with getting their shots.  Of course, they cried while they were sticking them.  Good thing was that two girls came in and did them both at the same time.  So, as soon as it was over they left the room and E&E were back to their normal selves.  They didn't even run fevers this time!!  YAY!!! When we got home it was about 3:00 and E&E were both knocked out in the car.  Naptime around here is usually between 12:00-1:00...so this was a late nap! Emma woke up about 5:30 and I woke Evan up at 6:00.  There is no telling how long he would have slept!  While I cooked supper E&E played with all their new toys.  A lady that works with me cleaned out all of her grandchildren's old toys and we really got some neat things!!  Blocks, train sets, baby dolls, movies, books, a bowling set that is actually their size and not oversized like the one I bought them, trucks, tools, and this neat little toy that has lots of hand-on activities all over it.  My mom is already working with E&E with their counting and colors.  They will both count to 3 sometimes 5 and occasionally they will get their colors right.  Leave it to a teacher to be working with 1 year olds!  After supper Tuesday night, Justin had his last regular season softball game.  Since our naps were so late this afternoon we decided to go with him to his last game.  We lasted about 5 innings before we headed to the car.  For the longest time...they just sat in their strollers and watched the game eating their cheerio's and playing with my water bottle!  Then, Evan was ready to get out of that stroller so we went to the car to watch Mickey Mouse.  They sat in the car and I watched the rest of the game.  At least I got to see one of Justin's games this year.  Here are a couple pictures of my sweeties at the ball game. 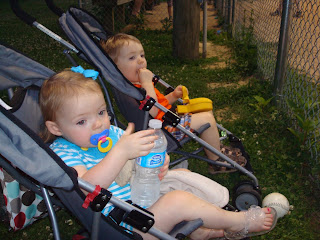 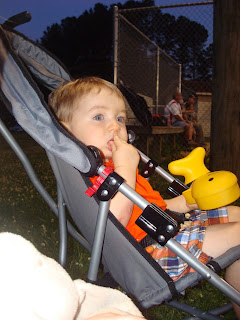 This wasn't their first because Justin played in the industrial league with Capsugel last year...but they were too small to even remember that...so this was the first ball game where they knew more about what was going on.  I spent LOTS of days at a ball field growing up and it looks like my sweeties might spend some quality time there too!!  Anyways...Happy Wednesday!!  The weekend is in SIGHT!!! :)
Posted by mreid496 at 5:58 PM