Well, Emma & Evan's third birthday has come and gone.  We started our Wednesday with a birthday song!  I brought both of them in our bedroom and we sang "Happy Birthday".  Then my mom call to wish them a Happy Birthday too.  And they were off to school!  I had made them cupcakes the night before to enjoy at snack time with the other kids at school.  So, I picked them up at 2:45 and we headed to Jumping Jax.  It wasn't the same as the zoo but it worked.  We got there right at 3:30 when they opened and were the only ones in their for over an hour.  That was NICE!!  Emma & Evan played and played!  We grabbed a pizza on the way home.  My kids love some Pepsi so I let them have that with their pizza and then we cut into Emma's cake from their party.  We only cut Evan's the day of their party because I had cupcakes too, so we had plenty.  They then got a Facetime call from Katie and a call from Alison.  So, they had a pretty good day!  Thursday we headed to the doctor for our 3 year old check-ups.  Emma told me first thing Thursday she didn't want to go to the doctor.  As soon as we got in the room Evan said "I want to go home!"  So how big are my sweeties.  Emma weighs 33 lbs and Evan weighs 35lbs.  They are both 38 inches tall.  So, for weight Emma is in the 70th percentile, Evan is in the 72nd percentile, and for height they are both in the 71st percentile.  So, they are pretty proportional and a little bigger than average.  Emma's blood pressure was a little higher than it should have been put she was a little excited when they took it.  (If you want to call crying and saying she wanted to go home...excited) They took it at the end of the visit and it was much better.  Evan finally got his flu shot...so we should be good to go for another year.  So, what are they up too these days??  They can both count almost to 20 by themselves.  They know all their colors, shapes, & most of their letters.  We have a picture book with all the letters and animals that start with each letter.  Twice now Evan has told us every letter and the animal that is in the picture.  Emma can do it when she wants too.  She is just as smart as Evan you just have to catch her when she doesn't know you are watching.  One day during nap time she was laying in her bed singing a song about the months of the year.  I asked her to sing it for me and she never has again but I could definitely tell she was saying the months of the year.  They talk NON-STOP.  I think their favorite word in Momma!  They tend to say it hundreds of times a day! Just kidding...I love to hear it!! They love to read books and we try to read a new book every night along with our nightly bible story.  Emma is really into playing dress-up and playing with her baby dolls.  Ever since she got a princess dress at her party...she have worn it EVERYDAY and the heels and jewelry that goes with it!!  Evan is into everything.  He doesn't really have a favorite.  He is loving his better batter toy we got him for his birthday.  I have to share a couple of the action shots Justin's mom took after their party.  Since we didn't have batteries, Jason was pitching the ball to the boys. 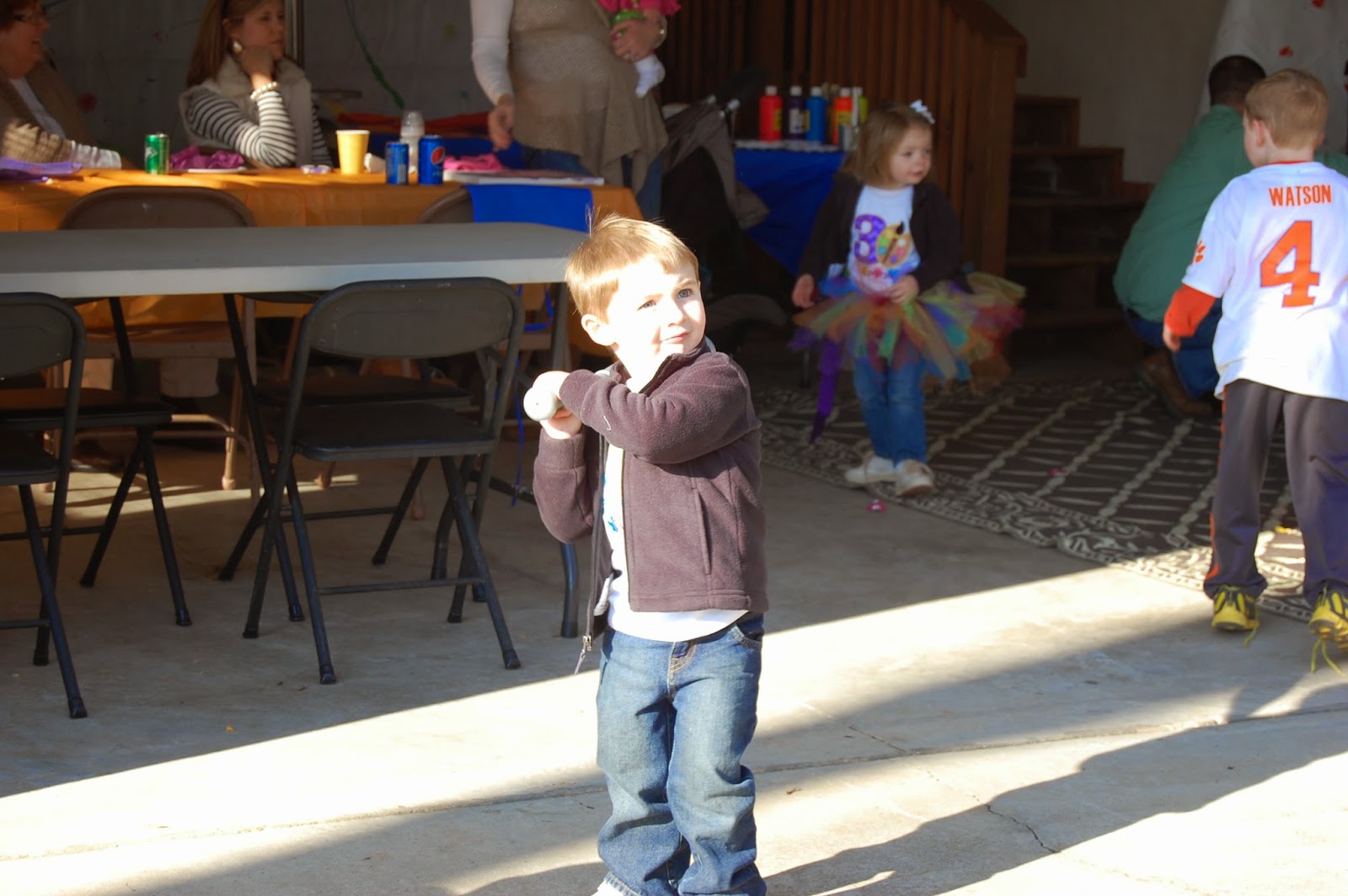 Here is Evan all ready for his pitch! 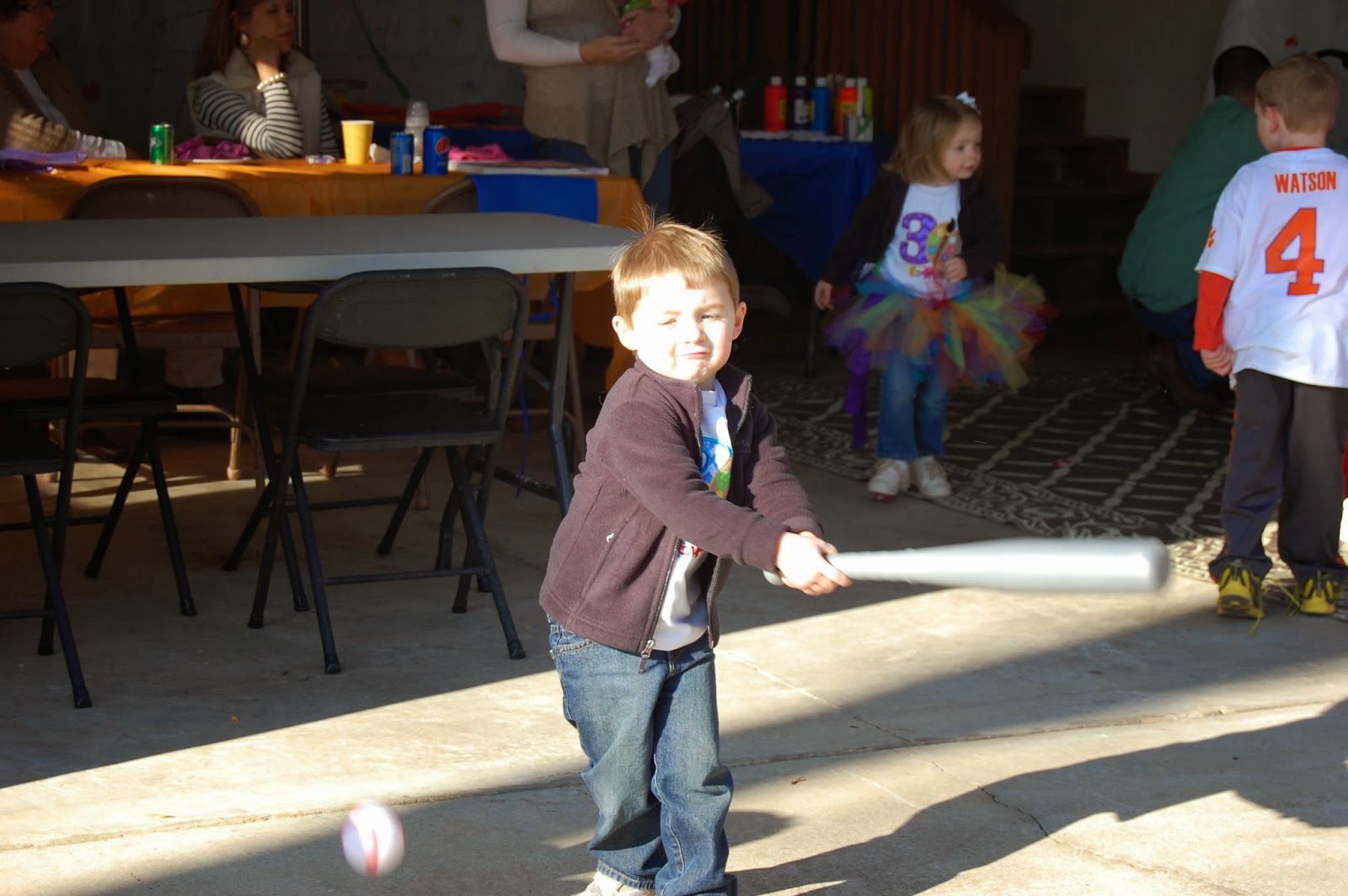 And I love the look on his face here after he hit it.  Pure determination!!

Then, Justin finished getting the rest of the toy together and thought he needed to demonstrate for the boys how it is done. 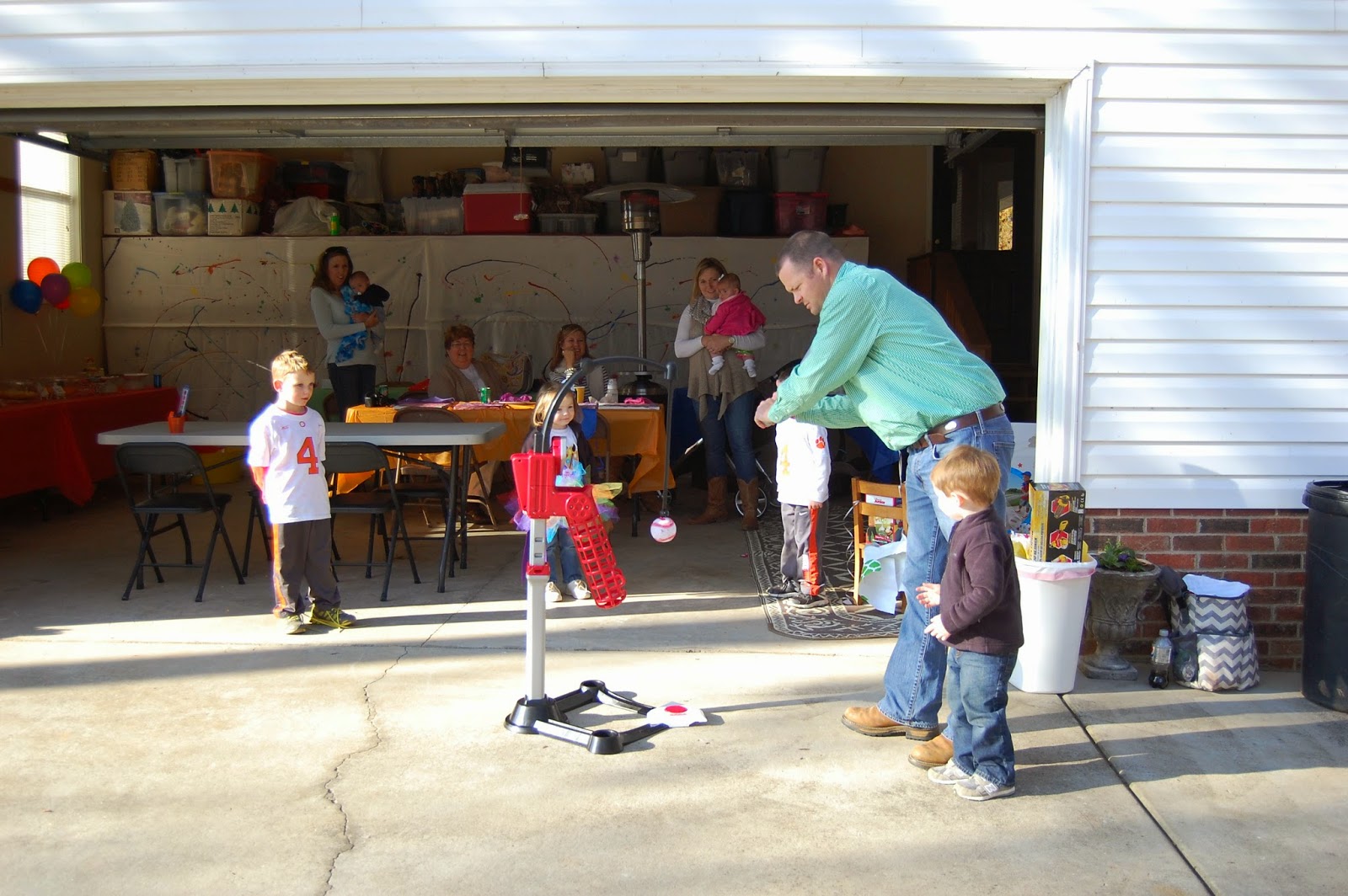 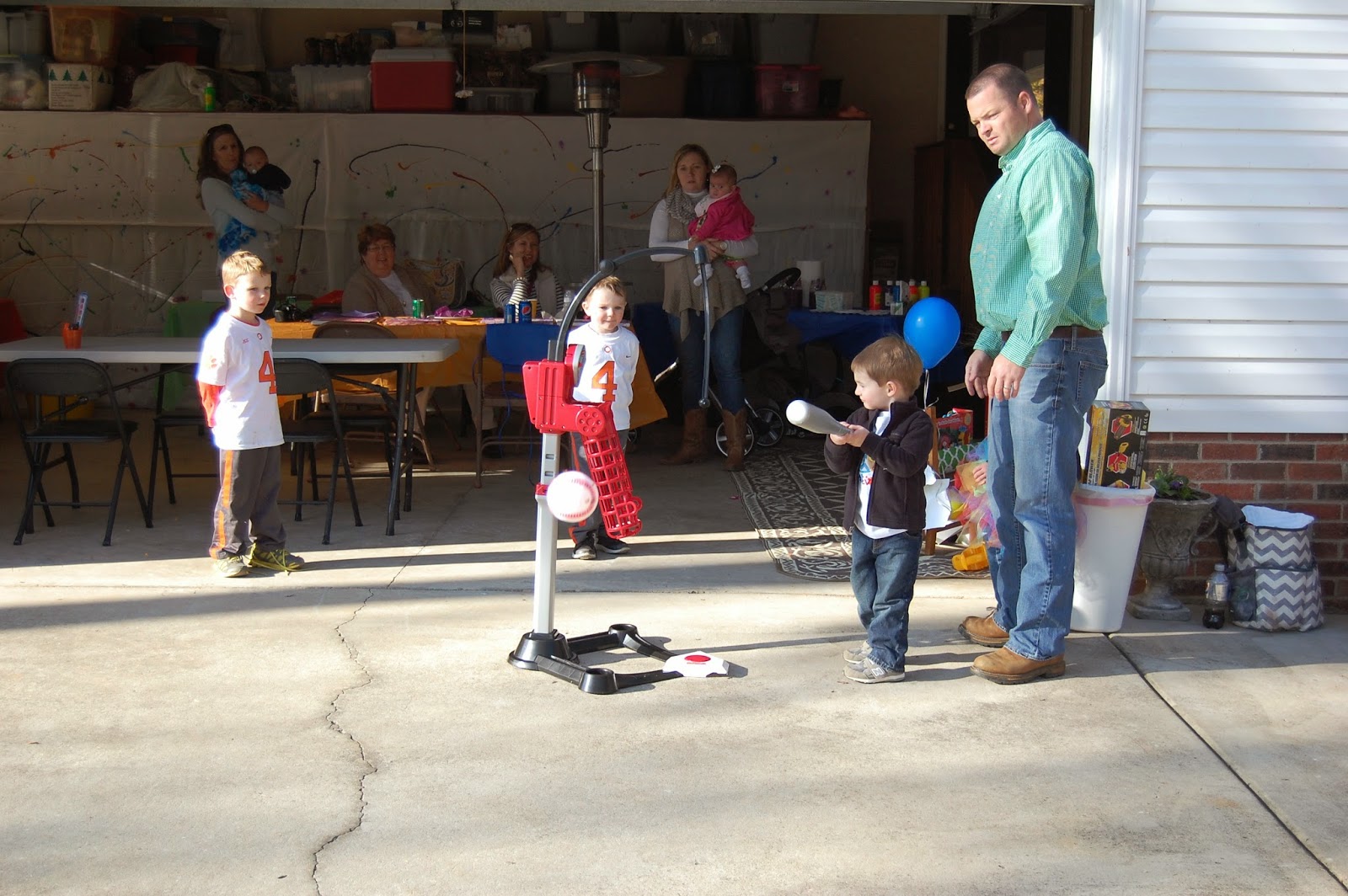 But I don't think Evan needed a demonstration.  You can see the ball flying through the air.  I think this is the one that hit Emma!

So, that is pretty much it for our three year update.  We are heading to the mountains this weekend so I'll let you know how that goes soon!  Have a great weekend!!
Posted by mreid496 at 11:10 AM