A little bit of EVERYTHING...

I can't believe it has already been over a month since I blogged last.  Well, time is short these days! Let's start with Emma & Evan's birthday party!!  They probably won't remember any of it but I couldn't have asked for it to go any better.  Justin and Aaron put the tent up Friday night and we started decorating EARLY Saturday morning.  It was COLD and I was a little worried what we would do if it didn't warm up.  It did though...so no worries there.  Katie & Alison did all the food so that was one less thing for me to worry about.  We had all the tables set up and the wagon ready for the hayride.  Emma & Evan took naps right when I wanted them to...which was another answer to prayer!!  As soon as guest started arriving we started the hayride.  All the girls took the babies on the hayride instead of the guys like I had planned.  Oh well..we enjoyed it.  Then, it was time to eat & of course time for CAKE.  Neither baby would dig into the cake like most 1 year olds do...but after I put Evan's hands in his cake...he got the hang of it.  Emma was not a fan of having cake on her hands.  Then, it was present time.  They sat pretty still for me to open presents.  Evan reclined on his beanbag the whole time and played with a cellphone Anna Kayla gave him.  That was a great gift for both of babies considering they are obsessed with a cell phone.  The whole day was perfect and they are both so blessed to have so many people who love them.  After everyone left we cleaned up and headed home.  I knew as soon as got in the car they would both be knocked out...but no such luck.   They played and played when we got home.  It was lots of fun trying to figure out where to put all those toys!

Next, we had our 12 month check up at the doctor's office.  The computers were down that day so I wasn't able to see how they had grown and what percentiles they were in.  Evan weighed 25lbs and was 30 inches long.  Emma weighed 21.8 lbs and was 29 1/2 inches long.  They are both doing great developmentally.  They are talking ALL the time and we can actually make out some of their words.  Evan can sing Deep & Wide, and they will both do the hand motions.  It is CUTE!!  Evan will give you sugar if you ask for it.  He will even give Emma sugar when she doesn't ask for it! :)  He loves her!!  They are pretty good listeners...Emma's much better than Evan.  Evan tends to listen when he wants too!  Typical BOY!!!  He loves being outside and Daddy has taught him to throw leaves.  Emma is still not a fan of dirt or touching the ground for that matter.  I don't blame her though...I'm not a fan of the outdoors either.  I have lots of plans for this girl that don't include dirt!!

Lastly, we went last week to meet Santa Claus for the first time.  I was so excited because everyone goes on and on about this Santa.  Well, the day was going just like I had planned.  We picked E&E up from school, took them home & fed them, and loaded them up in the car.  They both slept the whole way down there.  Evan woke up himself about 5 minutes before we got there.  Yay...another answer to prayers.  He isn't a happy camper when he is woken up!! We dressed them in the car and headed in for our picture time.  As soon as we hit the door Emma started clinging to me and crying if I attempted to put her down.  Not what you want when it is picture time.  Evan did EXCELLENT!!!  He LOVES to have his picture taken.  He wasn't afraid of Santa Claus and would sit in his lap.  Emma didn't do anything.  I even left the room hoping it would get better.  A few minutes later...Justin came outside hoping if we both left she would get alright.  Again...no such luck.  After we left she started clinging to the photographer and wouldn't let her put her down.  We ended up getting 2 pictures of them.  I had been telling people all along I just wanted one good picture of both of them.  Well...that's what I got.  One good picture.  Oh well...there is always next year.  At least I have one picture to remember this experience by!!

They are growing so quickly and becoming such independent little people.  We are venturing out by ourselves more.  I even took them both shopping with me this past Saturday.  Of course...I didn't try anything on.  With it being so easy to return things these days...we just by pass trying clothes on.  They do very good in restaurants.  Of course...we only go to loud ones in case they decide to scream...but they are easily entrtained by people walking by.  They are eating more and more table foods and have cut out formula.  I still add a little to their night bottles because I am NOT wasting what we have left...but once that's gone...NO more formula!!  Evan refuses to drink milk out of anything except his bottle.  He will drink water & tea out of his sippy cup fine...but not milk.  I try everyday and soon enough he will get over having to have the bottle.  I figure if this is the worst thing I face in life with him...I am doing good.  I can't believe we are fixing to celebrate their 2nd Christmas.  Santa got them a swing set for Christmas that Daddy is going to have lots of fun putting together. 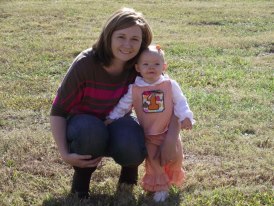 Momma and the birthday girl!! 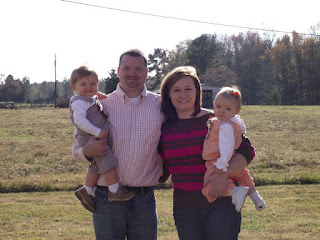 Family photo!!  It was a little WINDY!! 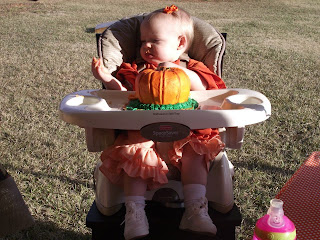 Emma thinking "Momma...what is this on my hands???" 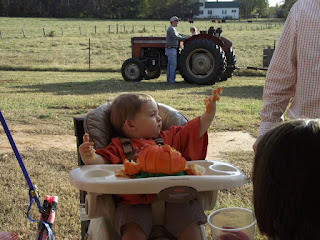 Evan offering Daddy some of his cake! 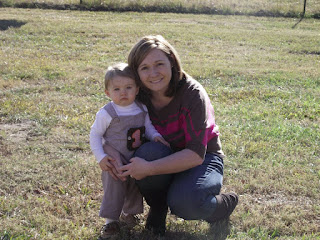 Momma and the birthday boy!! 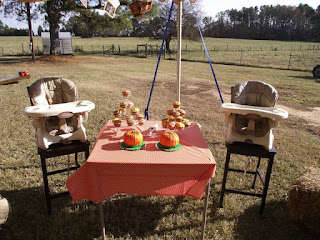 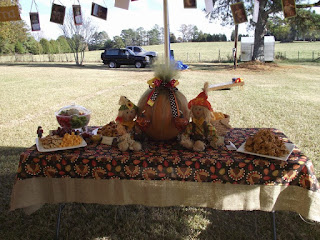 The food table...courtesy of Katie & Alison!! 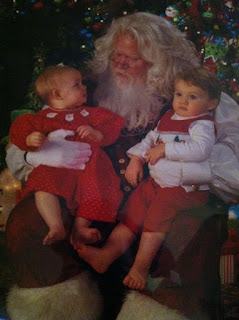 Our one picture with Santa!!