Well, last week was a busy one!  I can't believe how quickly time seems to be passing these days!  We had some beautiful spring like weather this week and I loved it!!  We got outside and played several days in a row and E&E thoroughly enjoyed being outside.  After weeks of what seems like being cooped up inside...the fresh air was nice!! I took a couple pictures one afternoon while they were playing.  They have become much more dare devilish in the past few months...and I am not sure this momma like that!  The like to slide down the slide head first now.  They also like to swing higher, climb up on the trampoline by themselves, and even stand on their bike handlebars and figure out how they can climb over the fence.  Yeah...there is no taking our eyes off them these days!! 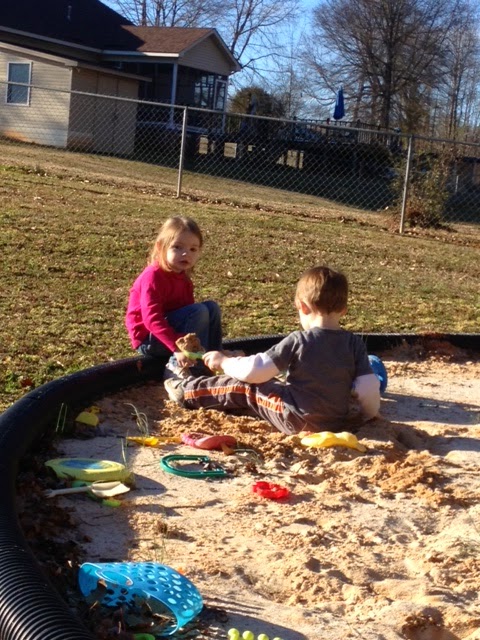 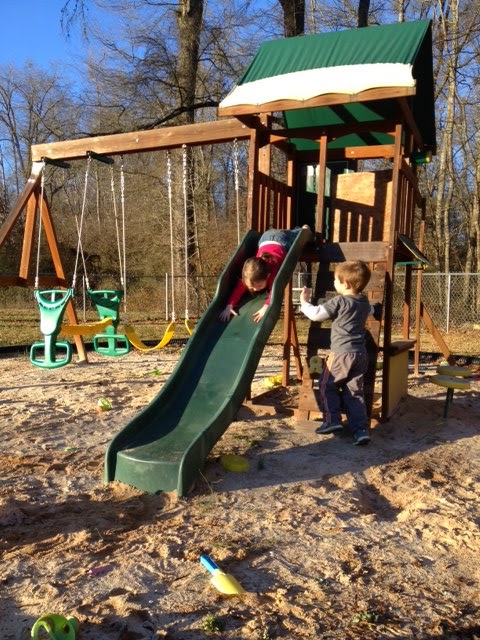 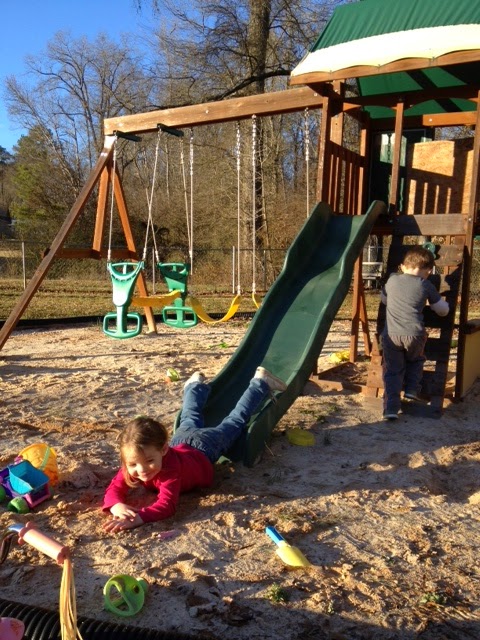 Emma sliding down head first!!  This was before she got a mouth full of sand! 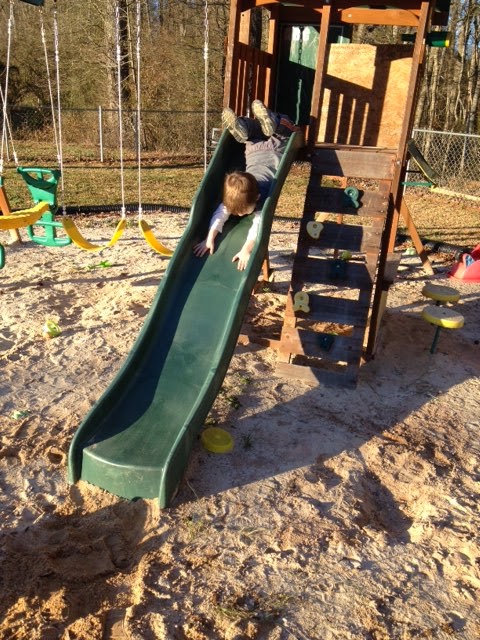 And Evan of course wanted to do this too!!

Friday afternoon, E&E spent the night with the Babb's and Justin and I went on a date!!  It has been a while since we have been out without Emma & Evan!  We dropped them off about 6:30.  Katie had a night full of activities ready for them.  They made pizza's for supper and even a chocolate chip pizza for dessert.  They also made play dough and of course sweet Laney watched the whole time.  They went to bed about 10:00 and it didn't go to well after that!  They went to sleep fine but it wasn't anytime Evan woke up crying saying his legs hurt and wanted him momma!  His legs hurt him lots of nights and I can remember mine doing the same thing when I was little.  Once Katie got him settled down...Emma woke up.  Once she got Emma settled down, Laney woke up.  So, Katie & Matt didn't get much sleep!  So, I told them we would keep Laney for them sometime soon and let them have a date night. 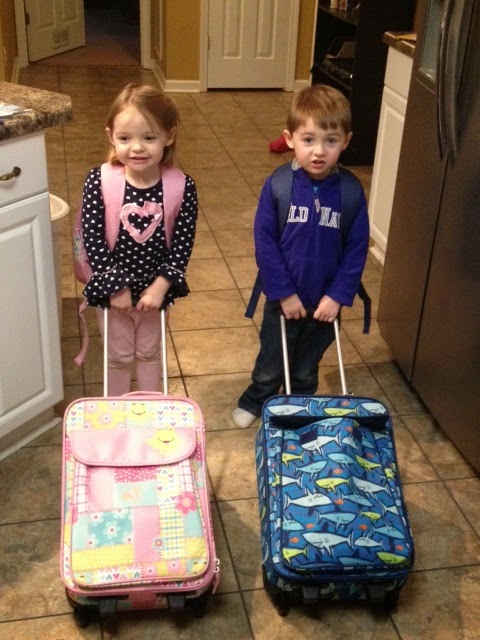 Here they are with their packed suitcases and backpacks!!  I know...they were only going for one night but I had to make sure they had everything they needed a little more in case Katie & Matt needed extra entertainment!!  Emma & Evan had a great time with Aunt Katie!!  Then, this morning...we headed back to get them about 8:30 because Justin and Evan were heading to the Clemson basketball game!!  Katie even cooked us breakfast this morning!!  Once Justin and Evan left, us girls headed out to do a little shopping.  Then, me & Emma went to a little girl's birthday party in her class at school at Jumping Jax.  Emma had a great time and from the stories Justin has told...Evan had a great day too!!  Justin said he did well even being as tired as he was.  He went to be early tonight!!  Here is the one picture Justin sent me while they were there!! 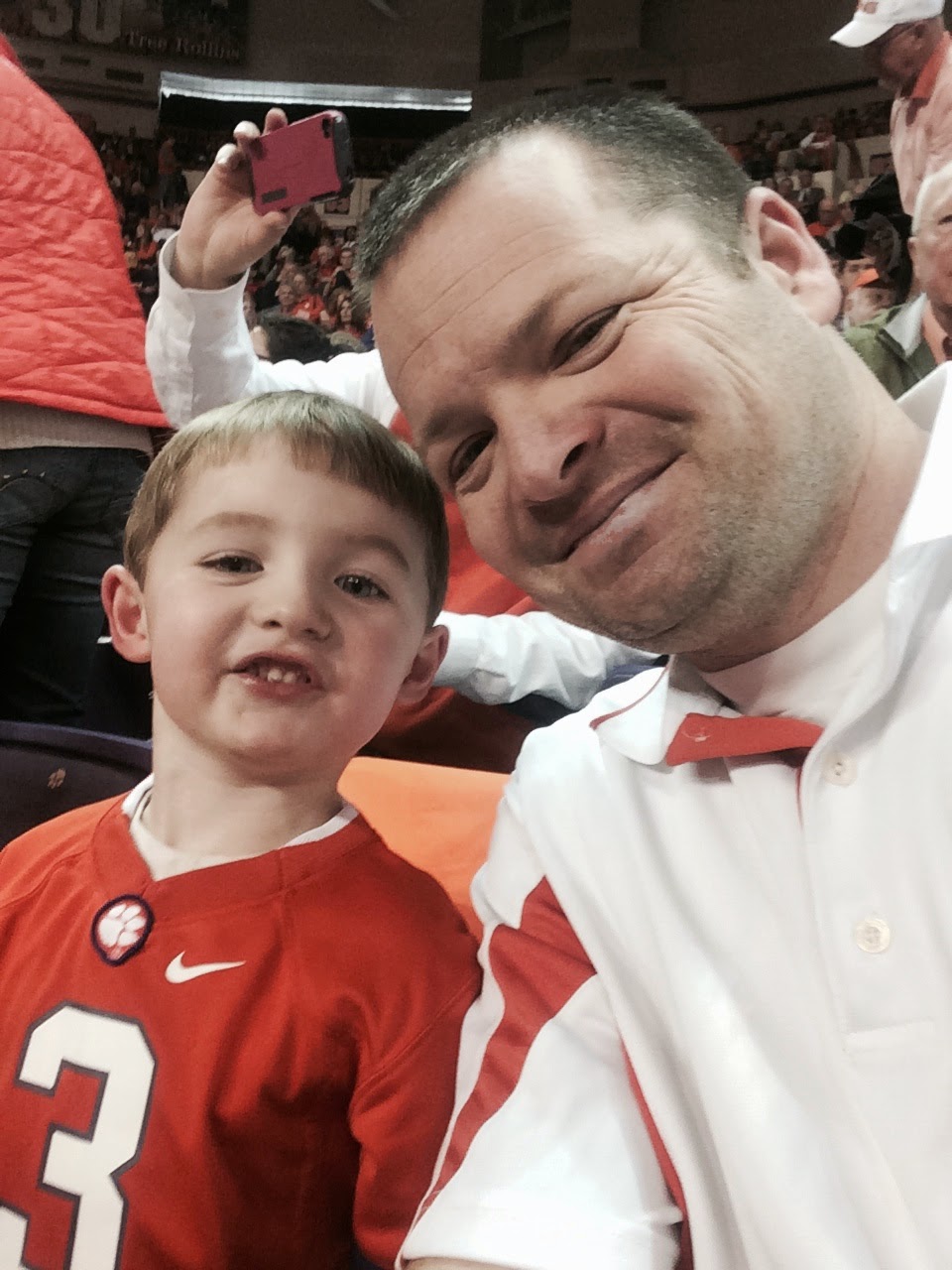 So, we have had an exciting weekend so far!  As for the new year=new things part 2...I have signed Justin and Emma up for the Father/Daughter dance in 96 on Feb. 7th!!  Emma had told me twice now that she wants to wear her pretty dress and go dancing.  She is going to love this night!!  We are hoping to get her into dance in the fall!!  Or maybe gymnastics.  She will be great at either!!  We are debating on whether or not to sign Evan up for T-ball next month!!  We were all excited until we found out all the games are on Saturday morning the whole months of April and May.  Justin is a HUGE fan of turkey hunting and Saturdays in April are always spent hunting.  He might just have to put hunting on hold for a while.  :)  So, this week...we are heading to the circus on Wednesday, we have Corley & Cooper's birthday parties in Spartanburg on Saturday morning and we are getting together with our 96 girls on Saturday night at KG's house.  So, this week will be a busy one too!!  Hope you all have a great week!!