Boys & their toys...plus a few extras!

I'm sure my title has peaked your interest. For a long while now Justin has wanted a zero turn lawn mower. I was totally against it because we just bought a brand new lawn mower 2 years ago when we bought the house and didn't need a new one. I often remind Justin he was lucky he is to not have the black yard machine, that actually fell apart while he was riding it, or the green John Deere, that would drive itself because it was possessed! Funniest story ever was when Justin was cutting the front yard on the yard machine and the front wheel completely fell off. I still almost cry laughing so hard when I replay that day in my head! You can only imagine what it was to witness that in person. Then, dragging it to the back yard with the 4-wheeler to work on it. Like I said before...Justin was lucky to have this nice new lawn mower! However, when he came home Saturday from conveniently having to get his lawn mower tuned up... he had somehow managed to get this awesome deal on the zero turn and being the good wife I am...I said ok! His new toy should be here tomorrow! I am waiting to see if this cut his grass cutting time in half like he promises it will. It is a much bigger cut so he may win on that point. Saturday night we decided to go out on a long overdue date night. Katie being the terrific sister and aunt that she is...kept E&E for us. We went to supper and of course ended up at Lowe's & Wal-Mart. What else is there to do in Greenwood?? Here is a picture before we left the house. 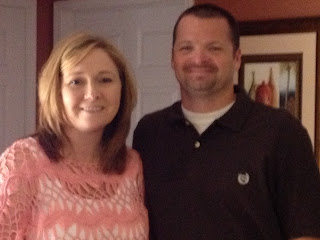 Sunday, we went to church and to my parents to eat like always. Then, I had to go to a baby shower for Amber. They are expecting a little girl in September. After supper Sunday night, we were outside playing and Marty asked us over for some homemade strawberry ice cream. Boy did we all enjoy it!! E&E played with Easton in his sand box for quite a while and I got to play with sweet Emma Grace. She is growing so much. She is up to almost 8 lbs. but she still seems so tiny. I can't even remember E&E being tinier than that. Emma weighed 5 lbs. when we came home from the hospital. WOW...that seems like ages ago! Yesterday was a sad day for the D&F family. Mrs. Davis died Friday afternoon and the funeral was yesterday. They closed the office at 10:30, so we could all attend the funeral. Then, the burial was down at Eden Hall in McCormick. After the funeral they served a meal and had a celebration of Mrs. Davis's life. One thing I have to admit about working at D&F...it is like one big family!! Monday we ended our One in a Million bible study.  Katie fixed Mexican lasagna and it was GREAT!!  I don't even eat half of things that I know were in the casserole but it was YUMMY!  Debbie Crittendon spoke to us about what kind of influencers we are.  It was great as usual.  Debbie never disappoints!  Today, we got long over due haircuts.  As we were outside playing tonight...I tried to get a picture of these hair cuts.  Evan hair is finally shaped back up and Emma just needed a trim.  Aunt Katie keeps telling me her hair looks like a mullet.  And it actually does but I am trying to let it grow out!  So, here are a couple pictures of my cuties with their hair cuts! 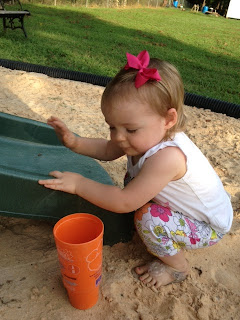 Emma refuses to let me take her picture looking at the camera.  So, here is a side view! 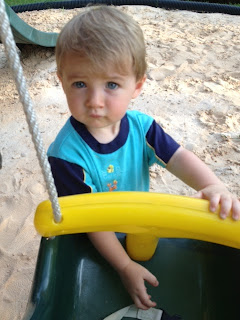 My serious child!  He wasn't too thrilled to stop for a picture either!! 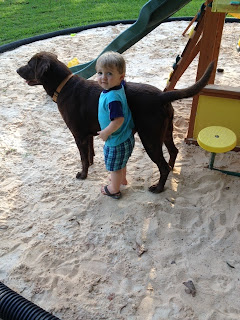 He loves his Cody though! 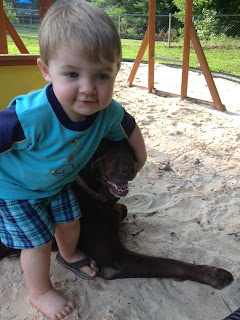 Evan likes to put him in head locks quite often.  I think Cody just enjoys the attention!!
Well, that's about it for this update.  Hope everyone's week is going smoothly!  It's almost hump day!!﻿
﻿