Today marks 9 months for Emma & Evan!  These past nine months have flown by!  I am excited to see the new things E&E are doing everyday but it also reminds me that they aren't babies anymore!  They are turning into toddlers.  Emma is pulling up on everything she can gets her hands on.  She actually thinks she can walk...so once she pulls up...she just lets go and of course falls.  It won't be long before she is walking.  Evan is starting to take interest in pulling up on things. He hasn't been successful yet but he's getting close!  Evan has now mastered the army crawl!  He wiggles & pushes himself across the floor and can manage to get what ever he wants!!  We went to Costco today to buy new cars seats!  Yes...it is already that time!  I really wish I had known about these car seats to begin with.  They grow with the baby.  They start as the rear facing seat, then go to the front facing seat, then turn into a booster seat.  What a great deal!!  Well, it would be if you were only buying 1 but since we were buying 4...it was QUITE expensive.  We also played referree all day long.  Evan thought it was a good idea to pull Emma's hairbow out.  Yes, she can FINALLY wear hairbows.  Granted the hairbow is only hanging on by a couple strands of hair but it is in there!  She didn't seem to even realize it was there but Evan could see it and was determined he was going to pull it out.  So, needless to say the hairbow didn't last long!  Then since the hairbow was gone...Evan thought he would take Emma's paci right out of her mouth...as he sucked on his own paci.  Of course he ended up scratching her and she started screaming.  I just hope this isn't the beginning of our fighting days.  They are WAY too young for that already!  On to the 9 month update...Evan is now 22 lbs.  He is 27 inches long, so that puts him in the 80% for weight, 40% height, and 90% for his head.  I knew he was going to be a smart kid!!  He is right on track developmentally.  They are not eating near what they should be in terms of amounts.  They love all kinds of baby food...they just need to be eating LOTS more of it.  We are working on it though.  On to Emma.  She weighs 19 lbs and is 26 inches long.  That put her in the 30% for weight, 40% for height, & 80% for her head.  I always thought she had a small head...but according to the doctor's charts...she up there too!!  She is also doing everything developmentally that she should be!  She too isn't eating near enough!  This coming Monday starts a new adventure for Emma & Evan.  They will be starting Learning Express, the preschool/nursery at South Main.  I have mixed emotions about this.  I am anxious for them to interact with other kids but I am not thrilled about leaving my babies with complete strangers.  We had orientation last night and got to meet Mrs. Linda who will be their teacher.  She does seem like the nicest lady and I am sure she will love E&E as much as we do..but it's not the same as Janice & my mom!!  I will be sure to post pictures of their first day and let you know how that goes!  Until next time...here are our 9 month pictures. 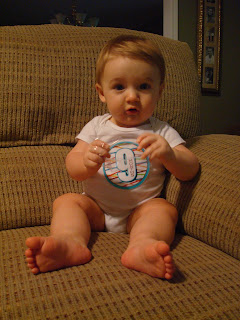 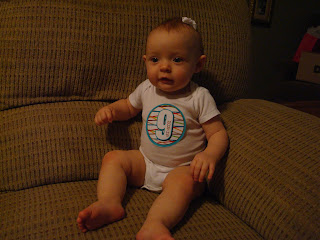 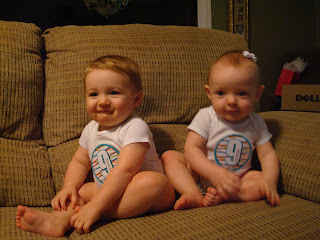