This blog is going to have to be broken up in two part because it is going to be long!  I have already downloaded 40 pictures and that was after I deleted some!! :)  Our Easter celebrating started on Wednesday with an Easter Egg Hunt at Emma & Evan's school.  I had volunteered to help with the Thursday party so I didn't attend the one on Wednesday.  So, Thursday...we headed to Learning Express about 11:00.  Justin was off that day so he met me at their school to help with the egg hunt.  Here are a few pictures from that party... 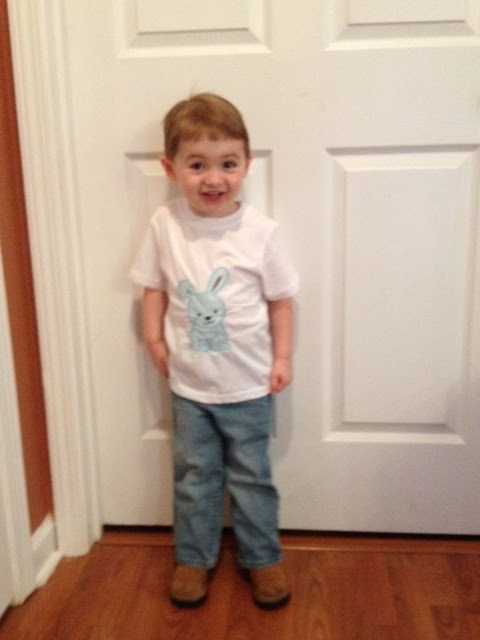 My two sweeties ready for their party with their bunny shirts!  Yeah...that monogram machine is coming in handy!! Lunchtime before the egg hunting begins!! 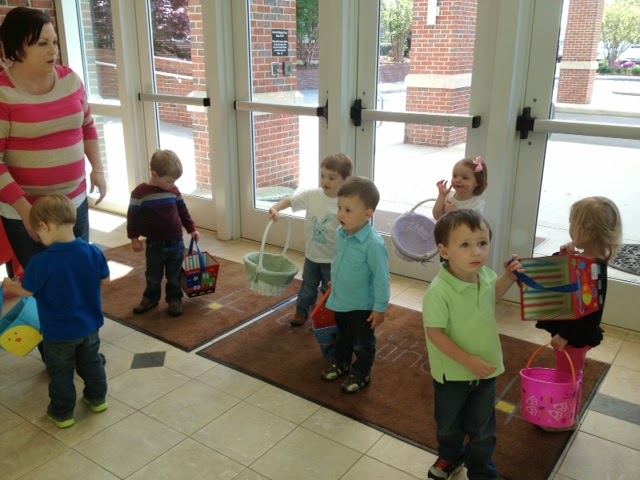 Mrs. Melissa getting everyone together! 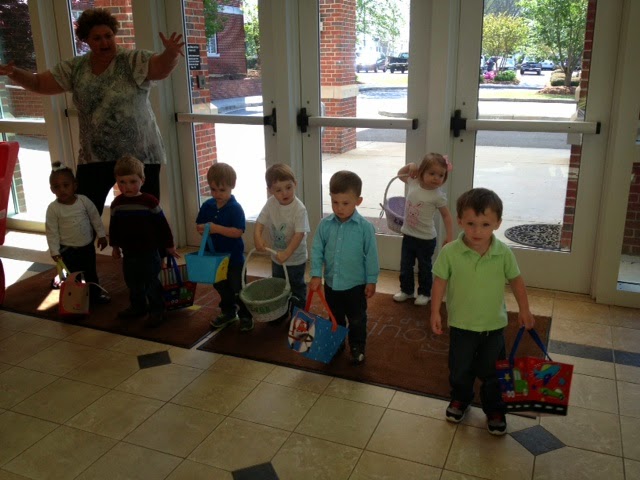 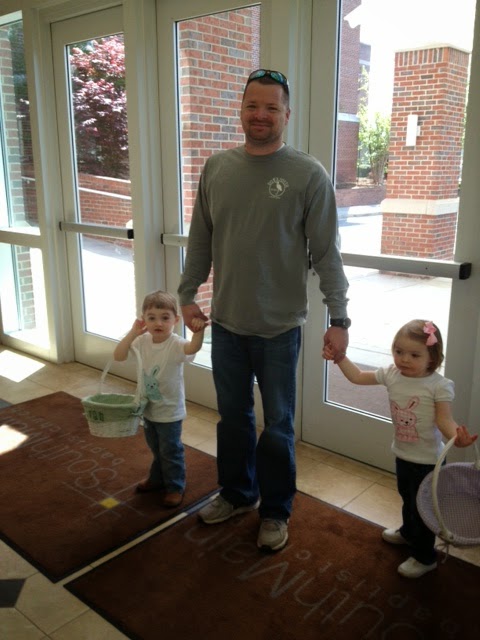 Mrs. Alison telling them to go and Daddy with his two kiddos! 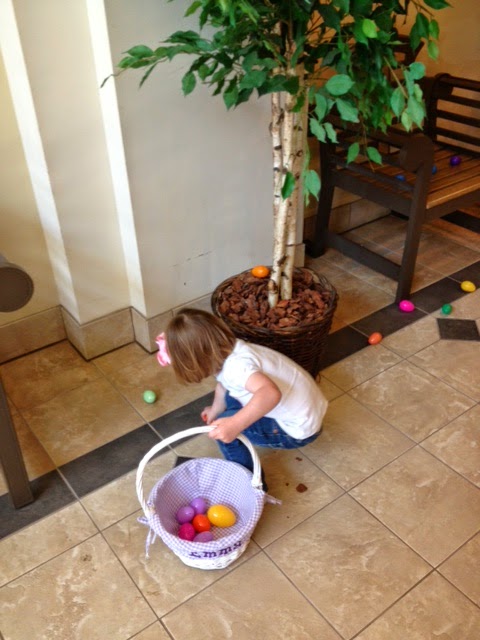 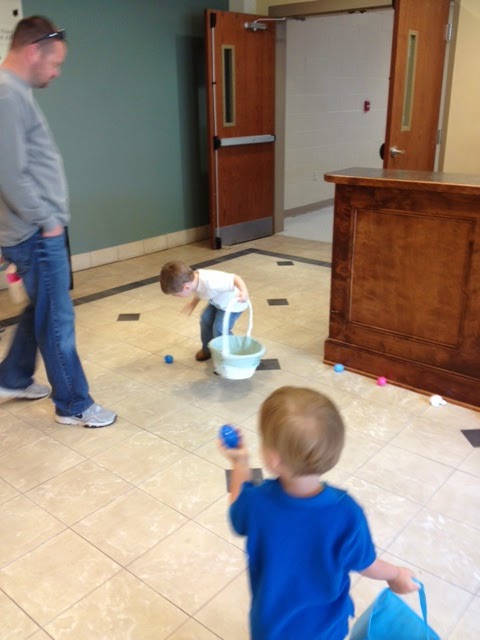 Emma & Evan LOVED finding the eggs this year.  It was much funner than last year!! 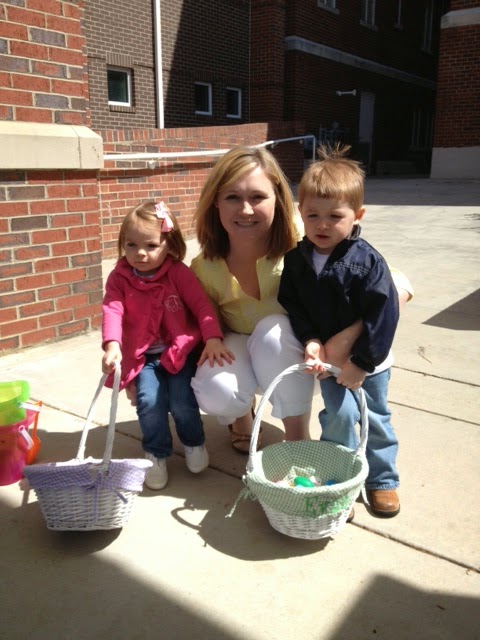 And a couple more pictures!! 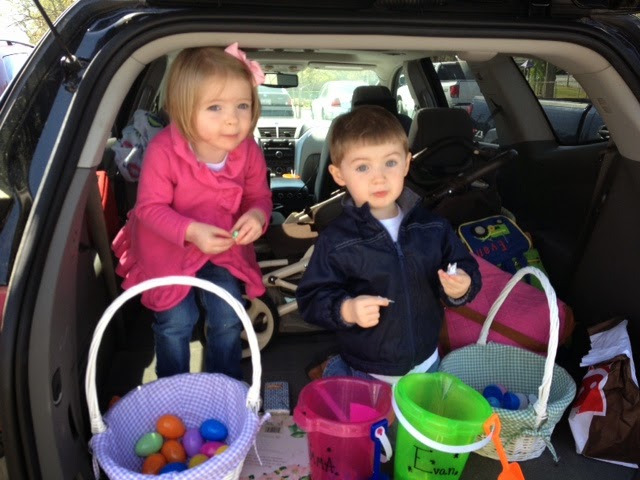 After the hunt was over we went through our eggs in the car waiting on MaMa.   It was such a fun time!

Friday, we spent the day working in the yard finally getting our border grass planted and we got our first truck load of mulch.  Poor Justin worked out in the rain all afternoon!  It is really starting to look so much better.  I haven't taken any pictures.  Hopefully this week and I am going to get my last two plants and some more border grass from Katie.  Then, we are going to get one more load of mulch and it should be finished.  BUT we still have to paint the porch and add the hand rails coming down the stairs.  Those were supposed to be added when the other railings were...but we're working on it!  Friday night I went to town trying to find me an Easter dress and Justin went to Lowe's to get all the stuff he needed for the rabbit box!  Saturday morning...I headed back to town for try #2 to find an Easter dress.  I found one.  I didn't love it but it would do!  After lunch...Emma & I headed to Emma Grace's 1st birthday party.  Since Justin was working on the rabbit box and wouldn't be going to the party...I decided to leave Evan with him and let him nap.  They had plans with Katie that afternoon and no-nap Evan is NO fun!! We had a great time at the party.  Kasey did such a great job on it.  It was supposed to be outside and the rain ruined that but thankfully everything still went really well.  We left and headed home.  My boss picked me and two other co-workers up and we headed to the Casting Crowns concert.  It was absolutely amazing!! I think it was probably one of the best concerts I have been too.  There is just something about an entire arena singing worship songs about God that will do your heart good!  I will definitely be going back!!  Laura Story is great too.  Colton Dickson wasn't my favorite.  His music sounded a lot like a rock concert...except that one song of his that I actually knew!  While we were gone...Katie came over and dyed Easter eggs with E&E and baked cookies.  Matt helped Justin with the rabbit box!  I think they ended up leaving at like 10:00...which was much later than they had planned.  What a great aunt Katie is!  Here are some pictures from all that that Katie sent me! 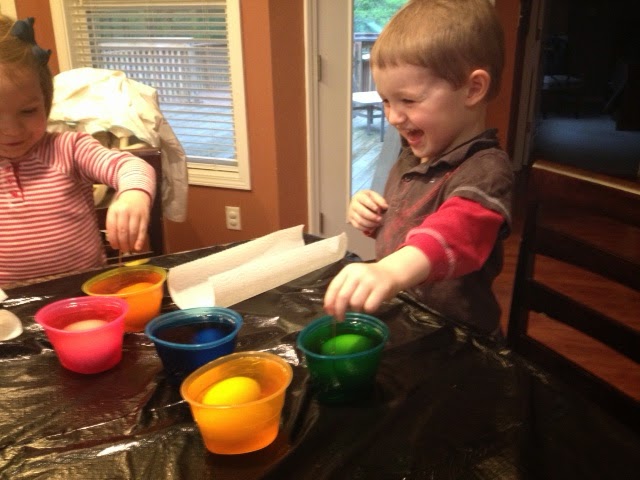 Egg dying at it's finest.  I love the look on Evan's face!! 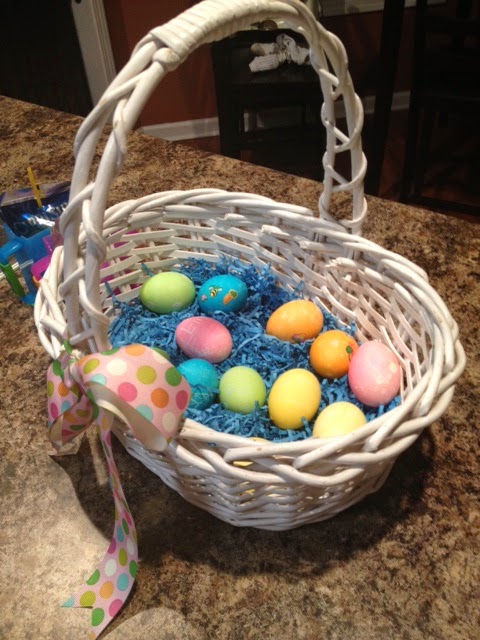 And the final products.  They even had one with their name on it!! 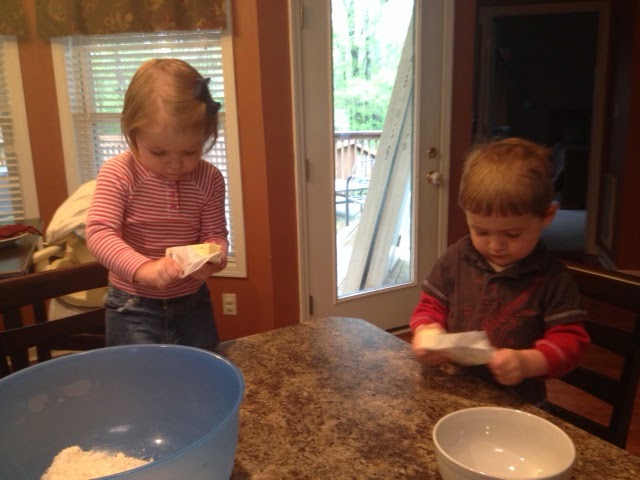 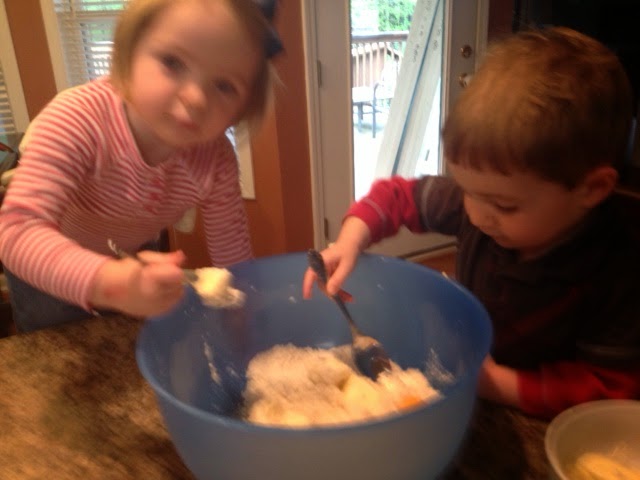 What big helpers they were!! 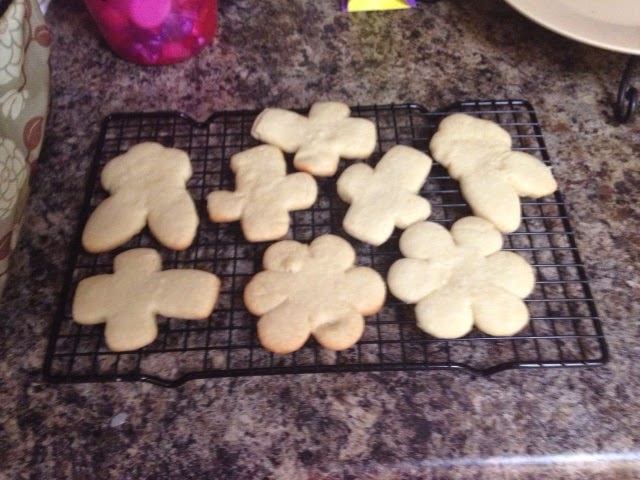 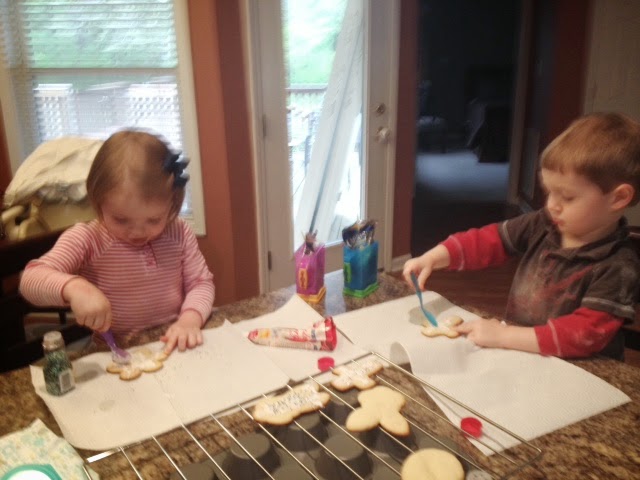 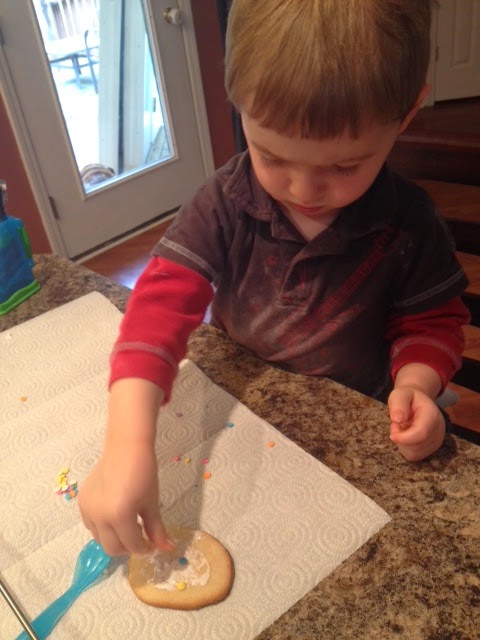 And the finished products!!

And the final pictures of the completed rabbit box.  I doubt this rabbit knew he was getting a mini hotel when he moved into the Turner household!!  Justin went above and beyond in making this house!! 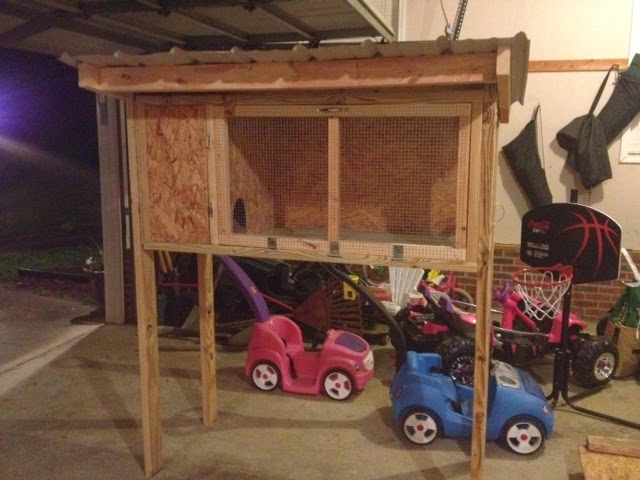 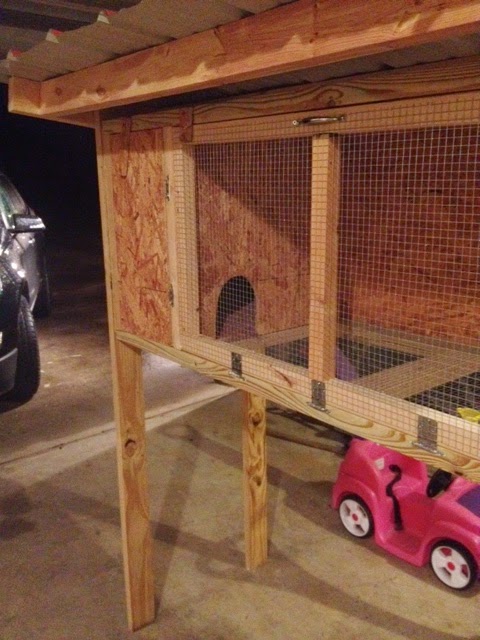 Once I got home from the concert...which was like 11:00...Justin headed over to Aaron's to bring little Daisy to her new home.  She loves her new house but she had no idea that Evan & Emma would be meeting her the next day!! 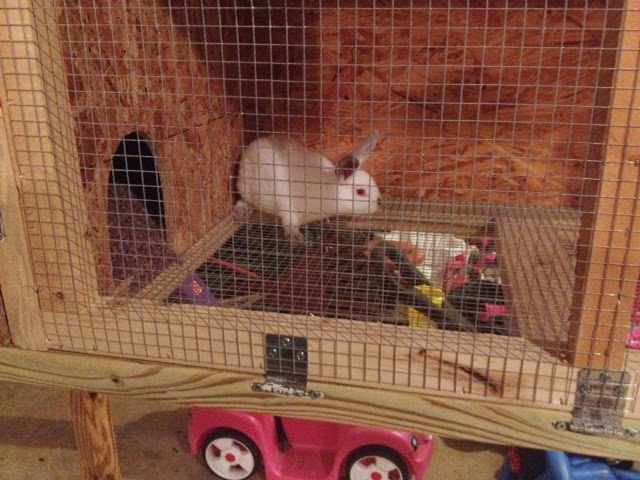 Checking our her new home!! 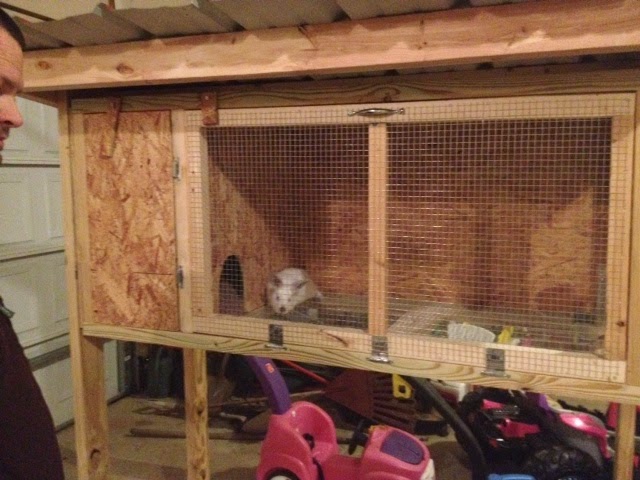 I am not a fan of packed full days or last minute projects...but everything got done that needed to get done.  Now it was time for bed and getting ready to celebrate our Risen Savior!  Come back for Easter part #2!!!