I am trying hard to keep up this blog but Emma & Evan are too demanding of my time and the blog gets pushed to the back burner! E & E are both full-blown mobile now and into everything.  From unplugging the lamps to playing in the trash to just about everything else...these two babies are really developing into little people!  I am blogging while they are taking their naps so I have a few minutes of peace and quiet before the chaos begins again.  I say that but we truley have two of the best babies ever!  It makes me smile everytime I see them playing together or laughing at each other.  It is my constant prayer for their lives that they know they are loved and to have carefree childhoods.  That what parents are for right...to do the worrying for their kids!  I know in these 10 short months...I have probably already done enough worrying for their entire lifetimes! :)  Let me update you and where the babies stand! Evan now has 4 teeth!  We aren't really sure when the second tooth made its apparance.  I was playing with Evan this past Friday night and saw something in his mouth.  So, I went in for a closer look and it was definitely a tooth on top.  We thought the 2nd tooth would be the other bottom front tooth but we were wrong!!  Then, today once again as we were playing I noticed the 2nd tooth on top and 2nd tooth on the bottom.  That's 3 new teeth in 4 days...WOW!!! Evan can crawl like a champ now.  He has even learned to pull up but the funny thing is he hasn't figured out how to get himself down yet.  When he is tired of standing in one place...he will cry until you come move him.  A typical lazy boy!!  That's alright though because he is my lazy boy and I enjoy doing things for him!!  Little Miss Priss finally has a tooth too.  We have know it was coming because she has been crying out at night and would stop as soon as we put orajel on her gum.  She is trying hard to walk.  She pushes everything possible around the house walking behind it.  She is a very curious child!  Emma has developed quite a personality.  She does not like to be told no and will give you a go to you know where look when you tell her no.  But...she is very good about listening and not doing things again that she has gotten in trouble for.  Evan on the other hand thinks it is funny when you pop him or tell him no.  We haven't quite figured out how to keep him out of trouble yet.  Both babies LOVE to clap!  MaMa has worked with them for months now on clapping and they also clap at school...so we wake up clapping and go to sleep clapping.  MaMa is also working with them on their numbers.  Typical Gail...she has to throw counting into their lives somewhere!!  That's fine with me because hopefully they will love school and learning.  They love to be read too.  Now they don't just sit still and listen to a story but like to crawl up and try to hold the book themselves.  Pop-up books are their favorite.  We recently discovered that Emma is terrified of animals.  Even small kittens that can hardly walk...wonder where she gets that from???  She loves Cody as long as he is outside and she is inside but once you take her outside she is not a fan anymore.  We went to Connie Maxwell for Jacob Evan's 3rd birthday party and she didn't like the horses, goats, llama, or the tiny kitten I refered to earlier.  Evan is a HUGE fan of animals.  He will stand at the door for hours...probaly not hours, but you know what I'm saying, looking for Cody.  He liked the goats and horses at Connie Max.  Justin takes that as a sign that Evan is going to love the outdoors.  Both babies are becoming more and more attached to me and I love it!!  It makes a momma happy that her babies want her all the time.  It is difficult when they both want you at the same time but again...I love it!!  That's pretty much it for now.  We are getting into party planning mode since we only have two short months before the big day!!  I've ordered their birthday outfits and made arrangements to have their 1 year old pictures done.  I can't beleive that time has already come.  So, be on the lookout for more party planning details and of course the BIG DAY itself!! 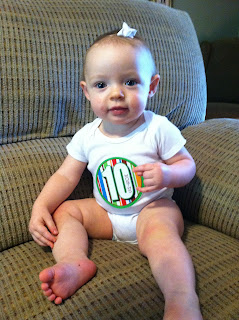 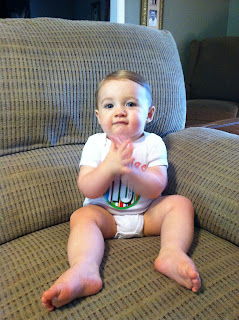 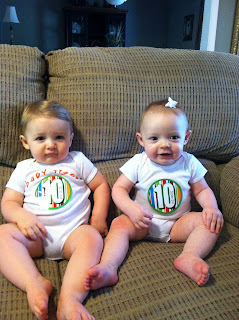 The BEST babies ever!!!